Solihull Cancer Support Group based in Solihull, West Midlands has been recognised with Queen’s Award for Voluntary Service for 2015

A voluntary group from Solihull who works in the community to offer support to cancer patients, relatives and friends has been honoured with the Queen’s Award for Voluntary Service, the highest award a voluntary group can receive in the UK. 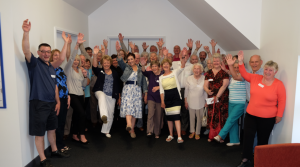 Solihull Cancer Support had their meeting in 1986, with a few like minded people with cancer supporting each other and has grown into a successful group that attracts the leading cancer specialists in the region, to impart their valuable knowledge, giving talks on all types of cancer to all who attend.

Patricia Hill, Chairperson from Solihull Cancer Support Group attended a garden party on behalf of the Group at Buckingham Palace on 12th May 2015 where she met the Queen and other winners of this year’s award.

Solihull Cancer Support Group is one of 187 charities, social enterprises and voluntary groups to receive the prestigious award this year. The number of awards handed out to groups have increased by over 60% from 2014, due to an increase in high quality applications, showing that the voluntary sector is thriving and full of innovative ideas to tackle community challenges.

The Queen’s Award for Voluntary Service is the highest award given to local volunteer groups across the UK to recognise outstanding work in their communities. The awards were created in 2002 to celebrate the Queen’s Golden Jubilee and winners are announced each year on 2 June – the anniversary of the Queen’s Coronation. Award winners this year range from Ablaze, a charity helping to raise academic achievement amongst disadvantaged young people in Bristol to a volunteer rescue boat service on Loch Lomond.

Solihull Cancer Support Group will receive the award from H.R.H. the Duke of Gloucester, in the presence of David Bradnock MBE, HM Deputy Lieutenant for the West Midlands on the 22nd September 2015.

“I warmly congratulate all of the inspirational voluntary groups who have been rewarded for their community work with a Queen’s Award for Voluntary Service. The judging panel for this year’s awards were struck by the quality and breadth of all the successful groups. The thousands of volunteers who give up spare time to help others in their community and to help solve problems demonstrate the best of democracy in action.”

“I would like to congratulate all groups who received this year’s Queen’s Award for Voluntary Service, in recognition of their fantastic achievements. The hard work and commitment that goes into the work of these organisations is surpassed only by the passion and motivation of the individuals who volunteer. I hope these groups continue to inspire others to get involved and make a positive impact so that we can continue to build a bigger, stronger society.”

We are delighted to receive such a prestigious award as this in recognition of the hard work and support of all the past committee members and volunteers that have helped make the Group what it is today, since it’s inception 29 years ago. I feel that this recognition will also raise the profile of other voluntary groups that do so much for the communities they serve and encourages people to put themselves forward to become a volunteer, as it is such a rewarding experience.

2. This year there were 187 winners of The Queen’s Award Voluntary Service from across the UK. More information on the winners can be found at the London Gazette https://www.thegazette.co.uk/

3. Any group of two or more people that has participated in voluntary work for more than three years can be nominated for the award. Full details on how to nominate are available at http://qavs.direct.gov.uk/